The main distinction of our beer is that that has been brewed like at many Czech local breweries in compliance with the law of small brewing. The fermentation of our beer is not accelerated; it might take up to 49 days – just the right amount of time to achieve the best harmony of taste.
Our beer is not diluted by water at the end of the manufacturing process. We do not use the HGB method so common these days whereby a stronger beer is made and subsequently diluted to achieve the correct volume of alcohol.
We do not offer unreasonably long lasting guarantee for our “alive” beer, that is why the beer contains more extract and we do not have to remove natural components which would degrade its taste.
We do not use any chemical additives, syrup concentrates (maltose extract) or genetically modified products for brewing beer. We use only four natural and traditional ingredients: water, barley malt, hop, beer yeast … and a lot of mastery. Craft beer is a flight of imagination, a creative motivation of the brewer who brews that. Craft beer is brewed in small batches and is sold mainly locally. 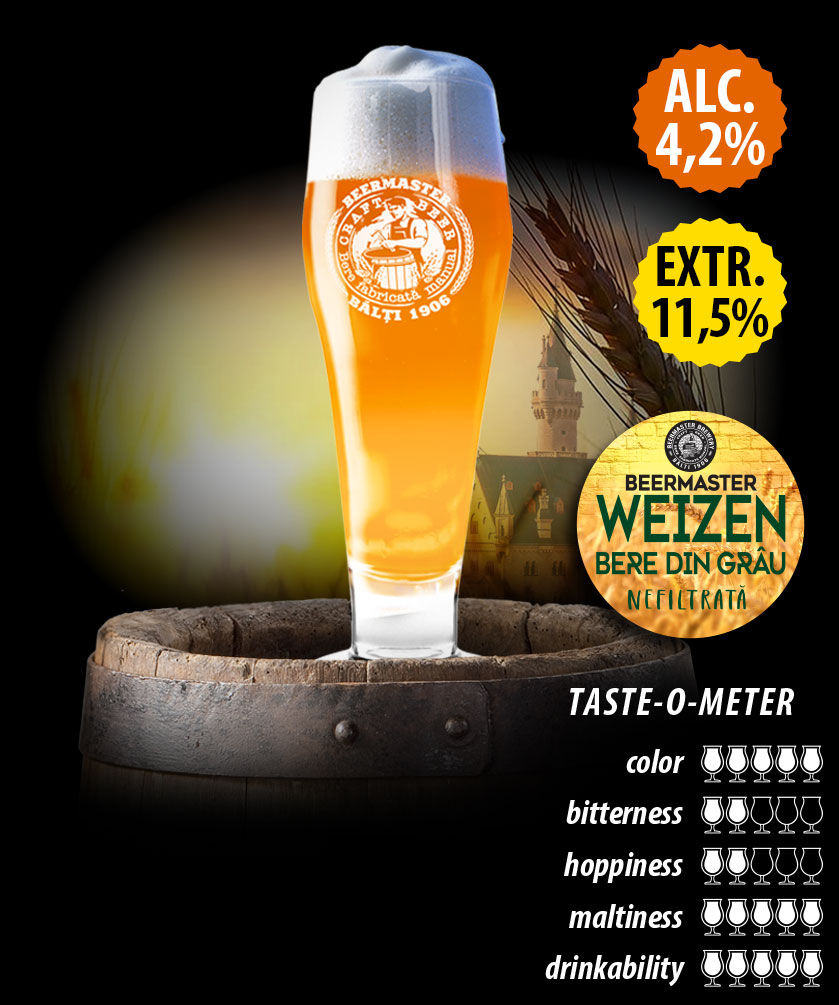 BEERMASTER
Hefeweizen
BEERMASTER WEIZEN is a refreshing unfiltered wheat beer brewed in a classic German style, strictly according to the Reinheitsgebot beer purity law of 1516.
The beer has a balanced taste and characteristic banana notes. The full body has a wonderful finish with notes of ripe banana – the top-fermented yeast esters creating that unforgettable wheat flavor. All raw materials and ingredients were brought from Germany. We have used two brands of malt - Avangard and Irex that are world famous for their high purity standards, perfectly balanced color and fermentation parameters.
We got so inspired by experimenting with cherry that wanted to add cherries to almost any beer. However, we’ve always liked the classic styles. Bock beer is one of the most intriguing.
BEERMASTER Cherry Bock is a cherry bock brewed with Munich, Chocolate and Pilsen malt. Fermented with cherries, that offers a strong sweet taste and rich aroma, revealing only a hint of Ahtanum hops.

Steve Gonchar
brewer at „BEERMASTER BREWERY”
“I don’t drink beer that is brewed with syrups and extracts. You can’t fake the cherry flavor. You need the real cherries. “ 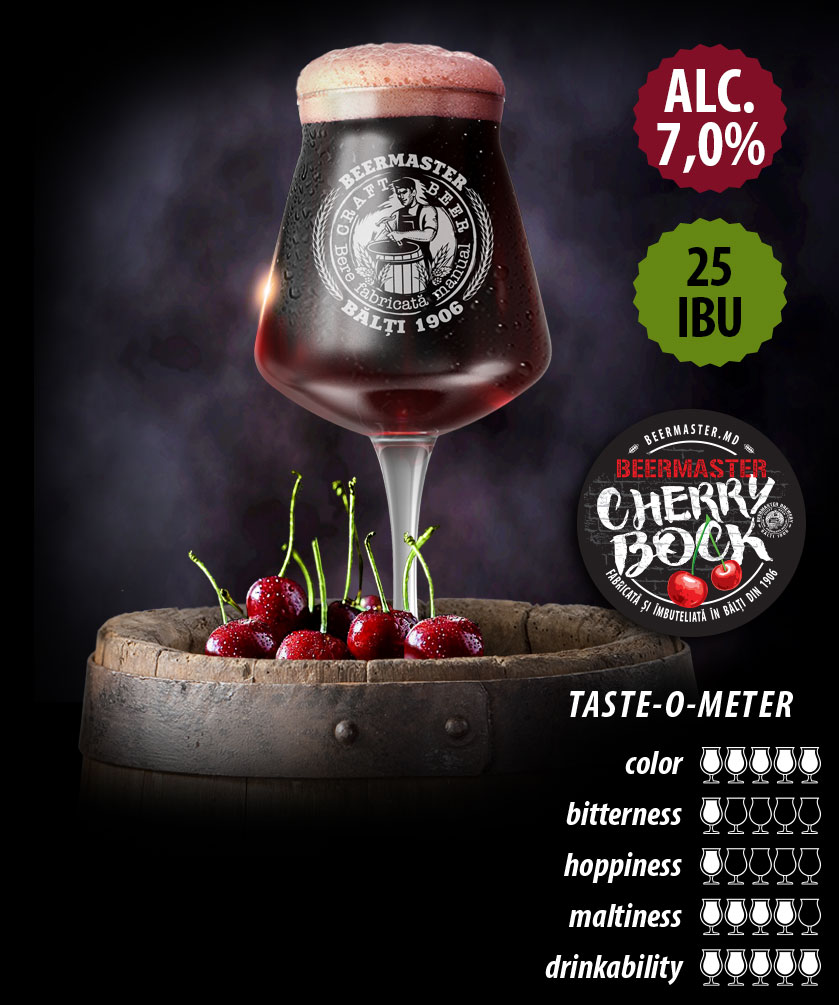 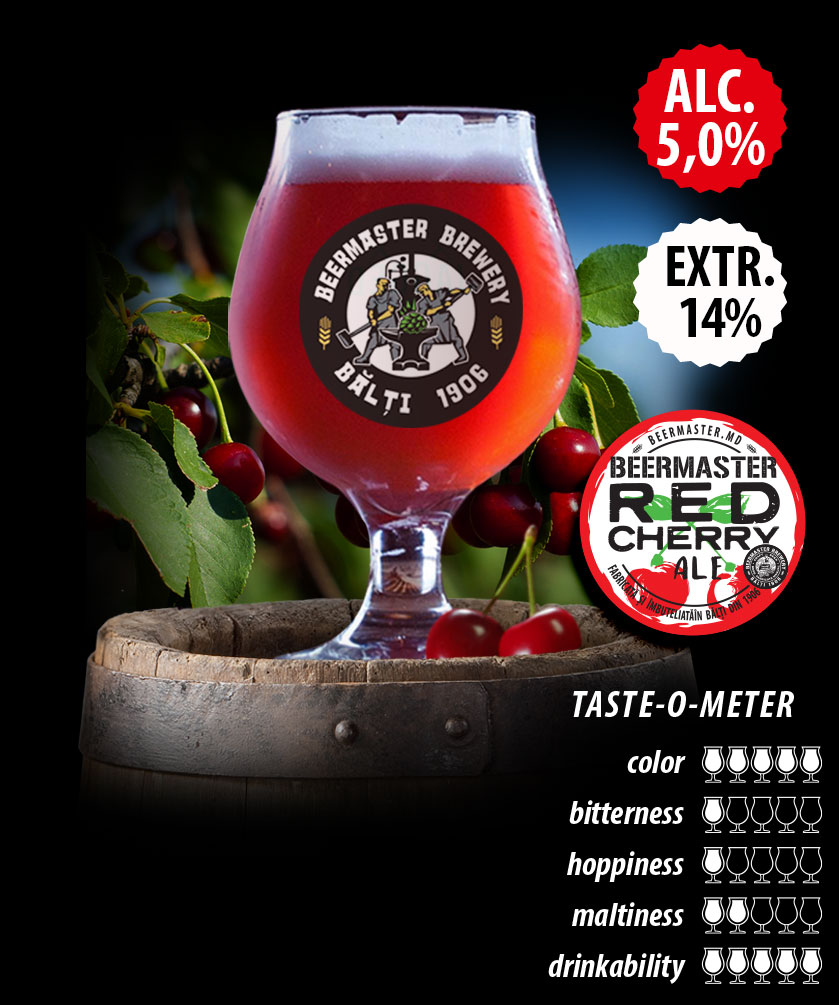 BEERMASTER Red
Cherry Ale
BEERMASTER Red Cherry Ale is a fruit beer with an addition of natural cherry fruits, brewed according to old recipes of Belgian brewers. We have used only whole fruit in our BEERMASTER Red Cherry Ale and we have used a lot of them in brewing: 200 gr of fresh cherries per 1 liter of beer.
Before starting to brew cherry beer in Balti (Moldova), the team of the BEERMASTER BREWERY plant had to do a hard job of studying all the subtleties and secrets of production. Today the brewery can proudly say that in our country it is possible to produce a cherry ale that is not inferior in taste and quality to an authentic Belgian beer.
BEERMASTER Red Cherry Ale has a refreshing sweetness, fruity bouquet, subtle acidity that comes with aroma of wild cherries and cherry pits.
Saison is the Belgium beer from the category of Farmhouse Ale. This beer traces back to the countryside regions of Northern France and Southern part of Belgium, Wallonia. Concerning the recipe of this beer’s preparation, there are no rules except for some principle intended to create this farming beer. In French it would sound like that: «Je ne sais quoi», that means "I don’t know what". Instead of malt, different kinds of grain might be used for Saison Ale. Hop, yeasts, and a wide range of herbs and spices are welcome to be taken while creating this ale.

BEERMASTER DOUBLE IPA
Double Indian Pale Ale
BEERMASTER Innovation Brewery Double IPA (DIPA) - contains twice more hops than the classic IPA. It has a strong hoppy character and intensity, for which it’s named “Hop bomb”. DIPA beer belongs to the bitter varieties and has a pronounced dense hoppy taste. The bouquet is dominated by citrus, fruit, pine notes, explosive hop aromatics and caramel aftertaste.
Douppelbock means “double bock”. These lagers are characterized by a higher alcohol content, which can traditionally be as high as 10% ABV and sometimes higher. Along with the additional alcohol comes a fuller body and a more pronounced warming quality.
The Doppelbock style was inspired by a strong bock beer brewed by monks in Munich for consumption during the Lent. They called this strong lager Salvator and started selling it to the public during the 1700s. The name “Salvator” was trademarked by Paulaner brewery when new owners took over the original recipe from the monks. As a tribute to this popular brew, many breweries choose names ending in –ator for their Doppelbocks. That is why we choose the name “CELEBRATOR” for our double bock beer.

BEERMASTER SUMMER ALE
Ale
This beer smells like a holiday, it smells like summer. We brewed it for those who want to escape from the city to the beach and catch a wave or spend a summer night away by the ocean. Feel it, experience it and never forget summer adventures!
For each cool moment of your summer, we have created a new BEERMASTER SUMMER ALE, brewed in the heat and for hot summer days. Light, nice and fresh ale for every day from BEERMASTER BREWERY. Blond and caramel malts together with the noble varieties of hops Hallertau Mittelfrueh and Saaz Noble raise the mood! Have a cold pint of BEERMASTER SUMMER ALE for all summer adventures and victories! Brew Up!
Have you ever tried a latest beer with the freshly harvested hop grown in Zatec (Czech Republic). This new sort of beer is brewed with the freshly harvested hop added in it. The main idea is that using a wet hop in the process of beer making, one is able to do it as soon as possible after the harvest, at the verily top of freshness. Taking into consideration the fact that fresh hop possesses a gentle, green peculiarities, one had better use it for the light lager beer. This is a perfect way to award the greatness of harvest. The fresh hop adds fineness, sharpness, causes trepidation and brings the energy of chlorophyll. Indeed, such feelings cannot be caused by the standard sort of beer. 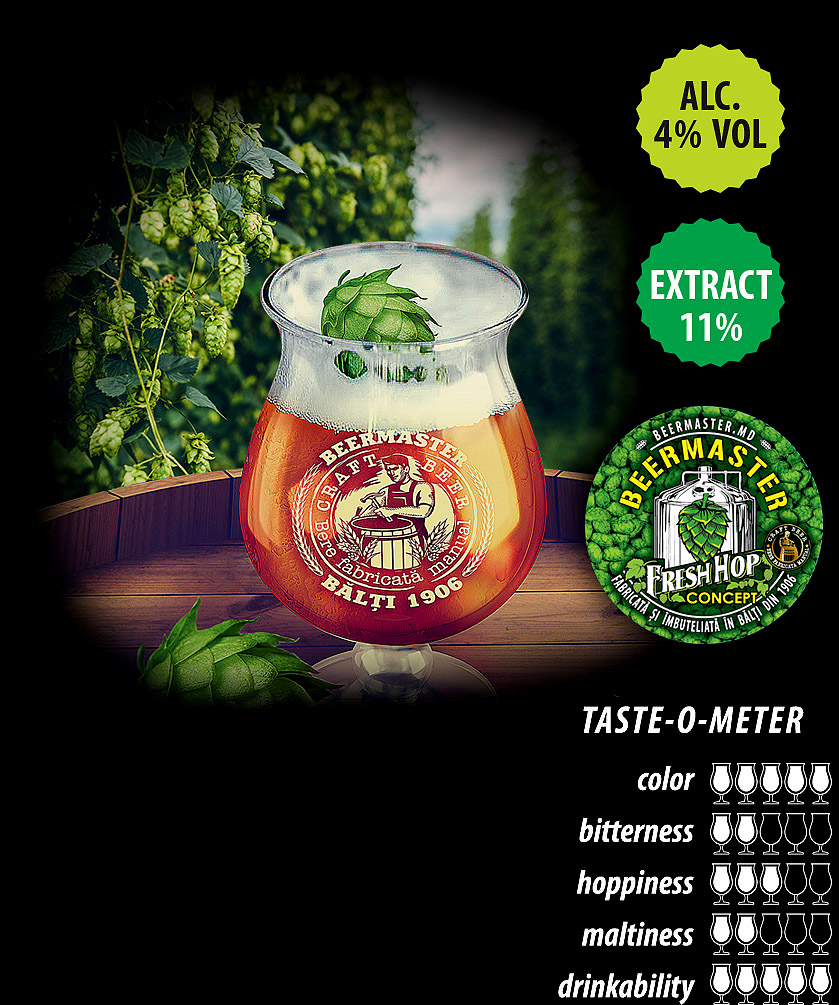 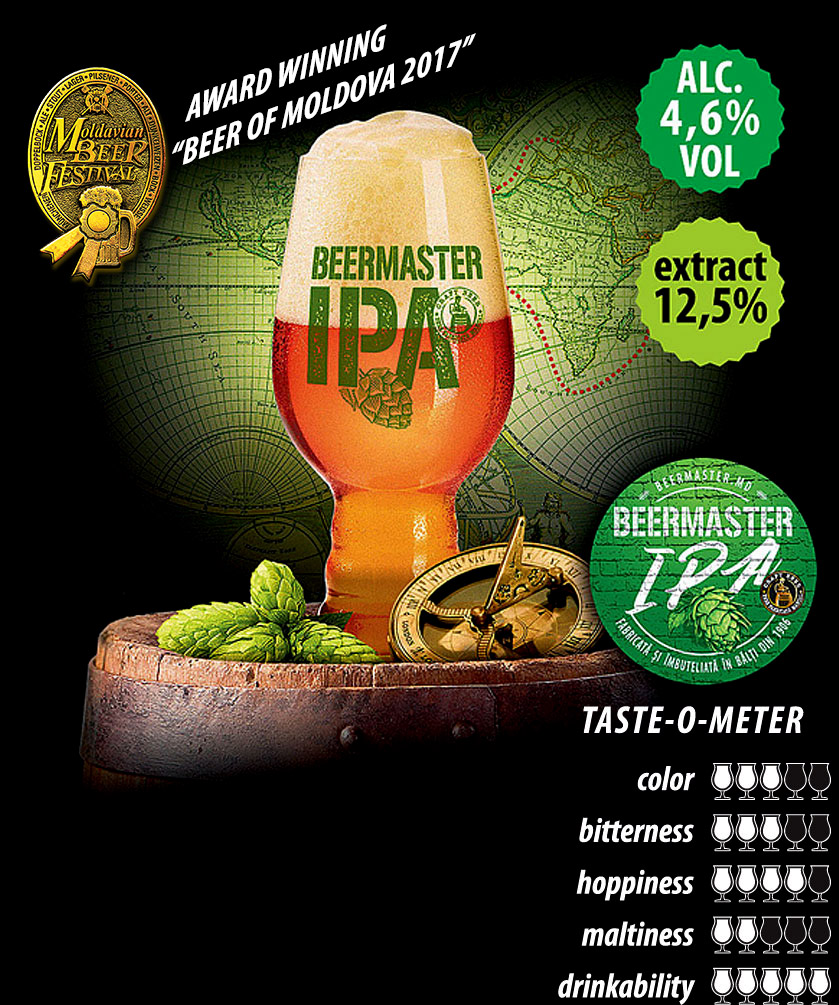 BEERMASTER IPA
Session Ipa
GOOD HOP MAKES A GOOD IPA!
Our big love and passion for hop allowed us to create this sort of beer called IPA. Historically, India Pale Ale appeared in the XVIII century when English brewers started exporting beer to India. This beer was enriched with hop, containing more alcohol in order to resist during the long continual journey that lasted about 4-5 months(particularly, hop acted as a natural preservative). BEERMASTER IPA is brewed with a rich addition of hops during the brewing process and at the final stage of fermentation. As a result of that, India Pale Ale turns out to become a beer with wild and strong types of selected hops that excite feelings with a deep and a bit pungent taste and a pleasant bitterness at the end which complete this very drinkable beer. Our BEERMASTER Session IPA is brewed in American style and has a golden color with a quite pleasant flavored and hoppy enhanced taste that has fruity and citrusy finishes.
All ingenious is simple! MALT and HOP are two main natural ingredients. While studying our historical brewing recipes, we have created this beer to mark the 110th founding anniversary of our brewery, founded by a German brewer (1906). We have used only malt from barley grains, carefully grown under the hot sun and the most noble and aromatic types of hops, just to give the beer a unique character and a wonderful hoppy flavor.
BEERMASTER 110 Ale is an American Pale Ale style beer with a golden color and a very pleasant taste that has a fruity aroma with caramel notes. 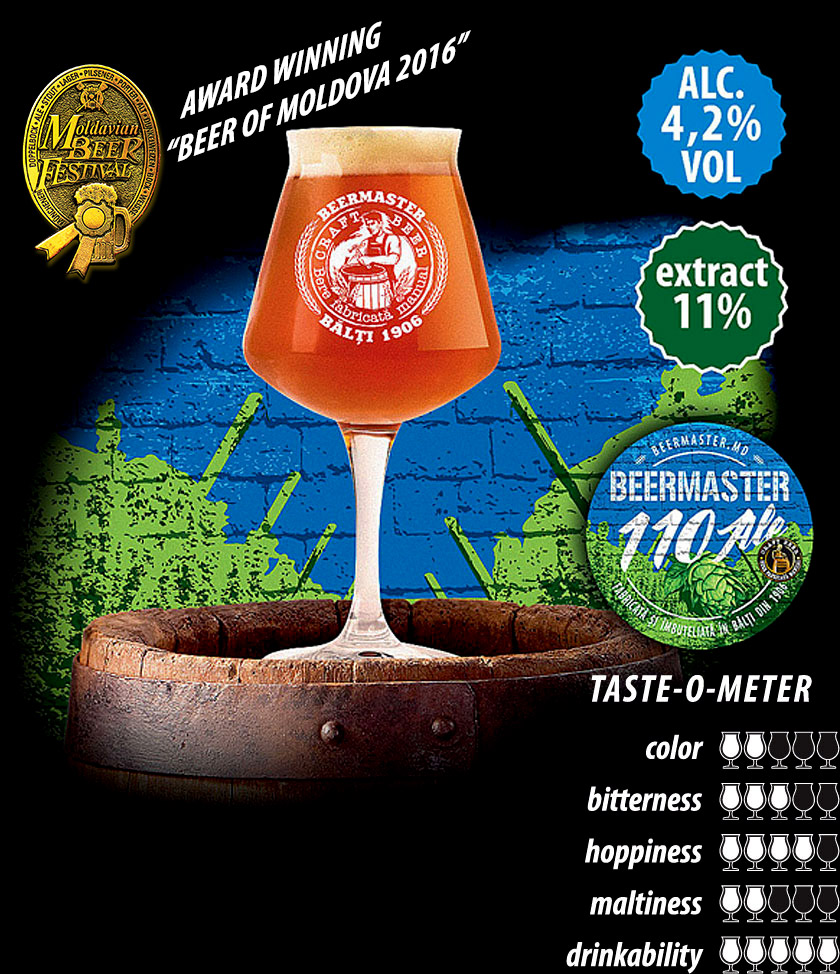 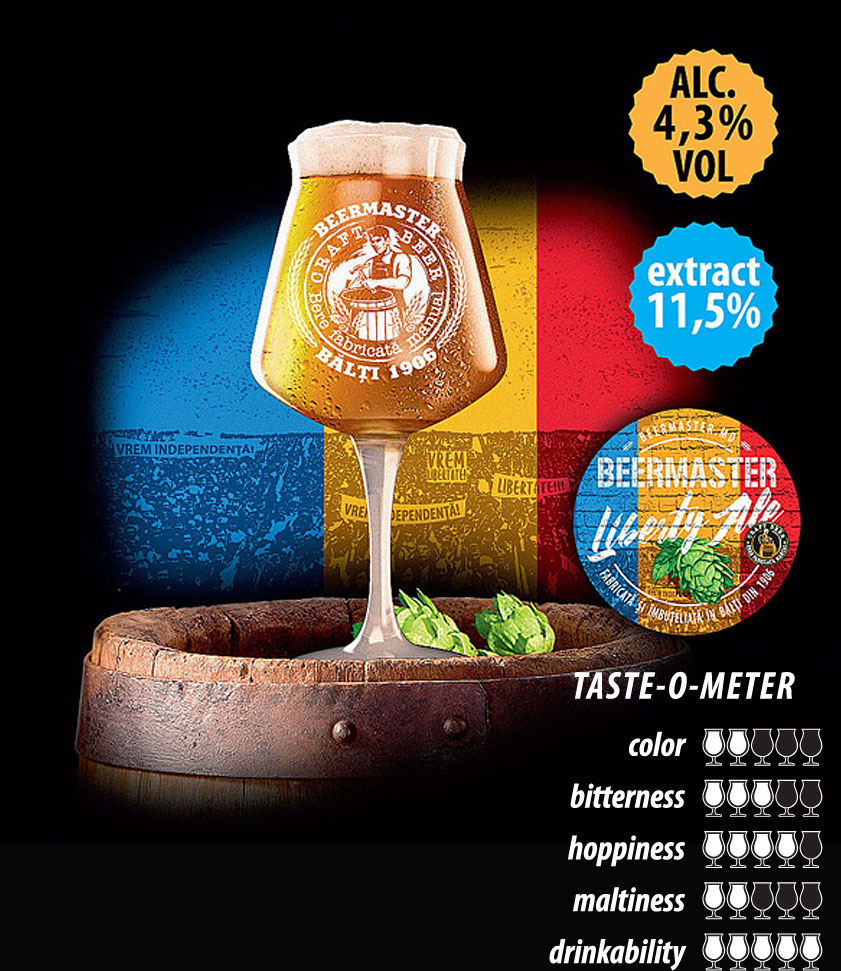 Moldavian Liberty Ale
American Pale Ale
The 26-th Anniversary of the Independence Day Ale created with great passion and dedicated to the celebration of the 26-th anniversary of the independence of our country.
Moldavian Liberty Ale was brewed successfully combining 2 types of malt: light barley malt and one of the best German caramel malt. We have used 6 varieties of hops grown in the United States of America. Each of these hop varieties gives the beer a special taste and unique aroma, and together this composition gives the beer a complex, but at the same time original character that has fine tropical notes of pineapple, papaya, mango and hints of orange and lime.
Beer aged in oak barrels is highly appreciated in Czech Republic, Great Britain, Germany, and the United States of America. The passionate beer enthusiasts always look for quality and individual taste interaction. In order to manufacture individual types of beer we should have small craft breweries. A lot of brewing factories have got huge automated production capacities, however, there are also small local breweries where true master works and personally controls the whole brewing process. The main characteristic of the BEERMASTER Oaked Ale is that it has been brewed, as well as at many other local Czech breweries, in compliance with the law of small brewing. Its special and well-recognized taste along with the oak flavor is reached during the process of aging beer for six weeks in oak barrels. Definitely, that is a triumph of the experienced master over the fully automated industrial technologies.
BEERMASTER Oaked Ale is an aggressive beer. You definitely would not like it. That’s wonderful that you've got the taste and sophistication to appreciate the beer of such quality and level.

BEERMASTER GOLDEN LAGER
Helles Style Lager
Helles style lager beer appeared around Munich at the end of the 19th century. The Bavarian brewers created this beer to compete with the extremely popular Czech Pilsner at that time. It is a blond beer, unpasteurized with a fine aroma of hops, aromatic, noble, soft and fresh at the same time.
Sometimes called “Munich Helles Lager”, this classic beer with a dense foam and strong aroma has a striking golden color. BEERMASTER GOLDEN LAGER is brewed using one of the most famous noble hop from Germany – TETTNANG, which brings out very fine aromatic hoppy notes. The beer goes well with pork or veal steak, snack or Bratwurst.
In Bavaria, they are known as "dark" (dunkel), in Thuringia they call them "black" (schwartz), and in the Czech Republic they are both(tmave or cerne).
BEERMASTER DARK LAGER is a soft lager with hints of roastiness. The dark malts come across more as chocolate and caramel. It has wonderful balance and strong dunkel character. 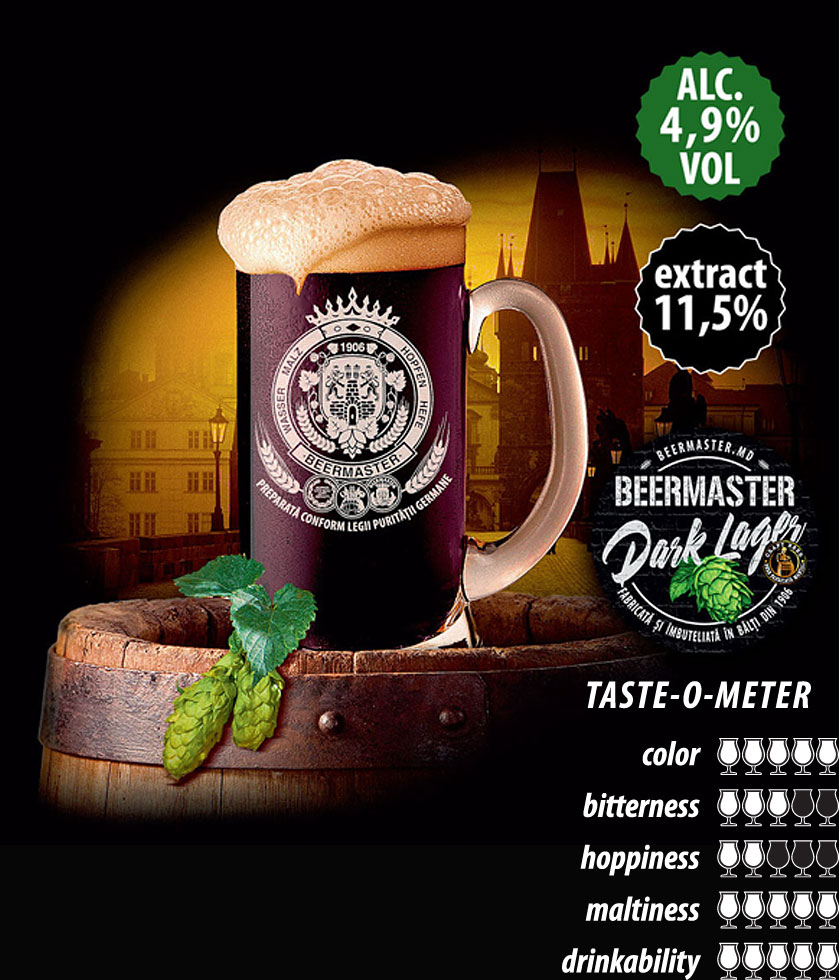